“Fruit wars”: How I took on a tech giant and won 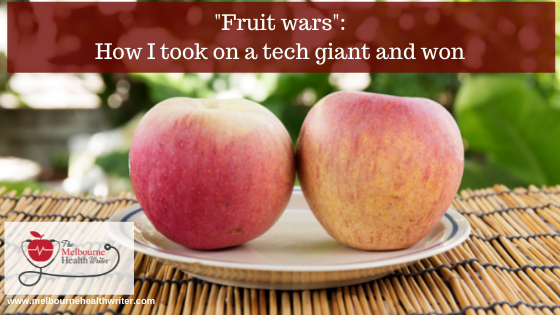 For those of you with a sharp eye, you might have noticed something different about my logo lately. If you haven’t, then that’s great!

Aside from the ® symbol in my logo, you’ll notice that the leaf has moved to one side.

Because I was recently engaged in a game of “fruit wars” — which I won!

Those of you who have trade marked a logo before know that the process can take some time, and that if another business believes that your logo is similar to theirs, then they are able to contest the trade mark.

All seemed to be going well, until at the 11th hour just before my trade mark was to be registered, lawyers for a tech giant named Apple lodged a Notice of Intention to Oppose my trade mark.

Apple was claiming that the trade mark was:

Now I don’t know about you, but my lawyer and I didn’t believe my logo was substantially identical, deceptively similar or likely to cause confusion with Apple’s logo, especially given I wasn’t even competing in the same industry as them. (For legal reasons I can’t use their logo, but do a Google search if you’d like to compare the two).

So we decided to fight.

Our next move was to let Apple know that we weren’t going to be intimidated by a global tech giant. So we lodged a Notice to Defend form and sat back and waited.

Given that that my logo had meaning to my business and I didn’t want the hassle of rebranding, designing a new logo, or a long, drawn-out court case, I happily agreed. Changing the side where the leaf sat was a very minor compromise which meant that I could still go ahead with the trade mark for my logo.

So we submitted a new design to Apple and they agreed to withdraw their opposition to trade mark my logo.

About 6 weeks later, my logo was officially trade marked and my business name was significantly protected.

What’s in a logo?

I am absolutely thrilled with the result because my logo isn’t just my branding — it contains powerful images that represent my business.

The apple, EKG line and stethoscope all serve to indicate that health and medical writing is at the heart of what I do.

My logo isn’t just my branding — it contains powerful images that represent my business. Click To Tweet

To be able to keep my logo pretty much intact is a big win for me.

I’m not a large business. In fact, it’s pretty much me doing everything with a bit of outsourcing on the side. Plus, I’m also raising a family, and taking care of a husband and a dog.

I don’t have a team of designers, marketers or lawyers at my beck and call, and I am a long way off being a $2 trillion business with a bottomless pit of money to spend on legal fees to get what I want.

So yes, I’m pretty happy with the outcome.

However, I would be remiss not to thank my amazing trade mark attorney, Lisa Wind from Win Trade Marks, who did all the work in getting me this result.

I’d also like to point out that the lawyers for Apple were apparently pretty reasonable to deal with, and were at no point out to get me. They were just doing the job that they were paid to do.

So now I’ve protected my brand, it’s back doing what I love — helping national organisations, global companies and health practitioners connect with the wider community, so they can be seen as the trusted health authority in their field. 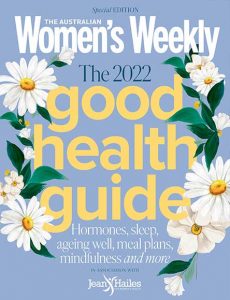